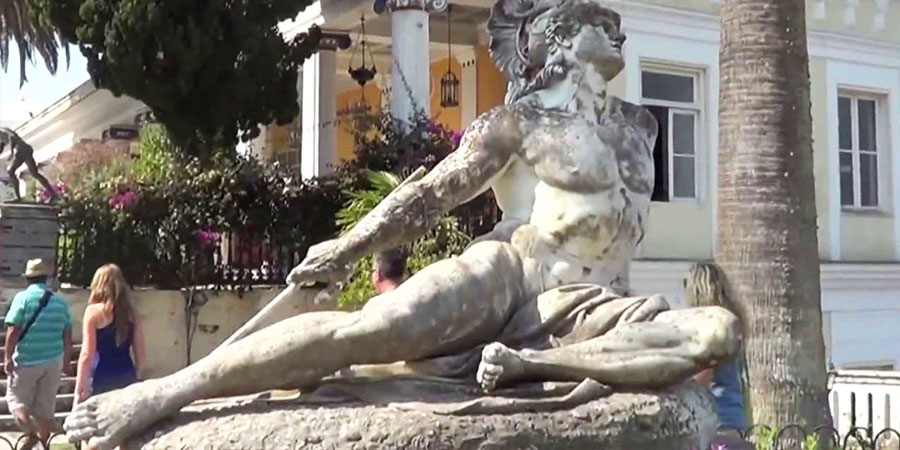 Achillion Palace is one of Corfu major attractions. It is a neo-classical villa designed for the Empress of Austria and Queen of Hungary, Elisabeth (Sissy) and hosts the famous dying Achilles statue in a setting of beautiful gardens and marbles.

Corfu Achillion was built between 1889 and 1892 by the Italian architect Raffaele Carito. The name "Achillion" was given by the Empress herself to honour Homer's hero Achilles whom she admired both for his strength and divine beauty.

The building was decorated with representations and statues of gods and godesses in a mythical setting.

After her assasination in 1898 it was sold to the Emperor of Germany and King of Prussia, Kaiser Whilhelm II. At the time the Palace was also used as a centre of European Diplomacy - until 1914 when the WW 1 was declared. During the WW 1 it was used as a military hospital by the French and Serbian troops. Kaiser built a stone jetty for his summer pleasure trips which now is called "Kaiser's Bridge" and you can see the remains of it if you drive through Perama on the way to south Corfu.

During the WW 2 it was used as headquarters for the occupation forces. In 1962 the upper floors were converted to a casino and the ground floor became a museum. In 1994 the Palace was utilised for the needs of the European Union Summit Meeting that was held in Corfu.

The Achillion Palace is also famous for its colourfull gardens which overlook Corfu town and the Ionian sea, in a place that was chosen to shot scenes for the James Bond movie "For your eyes only".

The Achillion Palace is in Gastouri area, 7km from Corfu town. Parking could be a challenge on a busy day. The best time for visting is during the afternoon.

If you wish to see it with your group and learn more about it's history you can get the Corfu sightseeing tour (8hrs) or the Achillion & Corfu town tour (4hrs). 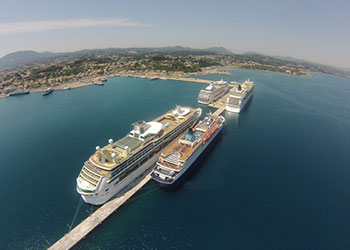